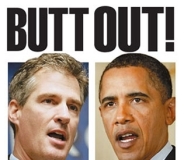 Scott Brown. We don’t need you to join Washington DC’s party of NO and hurt Massachusetts rather than help us. You couldn’t hold a candle to Ted Kennedy’s quiet compassion, his strong activism, his ability to talk with the average guy and come to an understanding. Scott Brown, you don’t have the chops to be a Ted Kennedy. The people of Massachusetts loved their senator and he loved them back. It will be hard to fill his shoes but Martha Coakely has a better right to Kennedy’s shoes and seat in the senate than you do.

And because of you, Scott Brown, I am going to do something that I didn’t think that I’d ever have to do – change my independent status to Democrat because repugs were calling me left and right trying to smooth talk me into voting Republican. You have got to be kidding, I told them! They even used my first name as if we were cousins! Why would I want to besmirch my voting record by joining the party of NO? The taint of republican negativism wouldn’t allow me to hold my head up – I hope Joe Kennedy, the tea bagger, steals your votes on January 19th.

This Massachusetts voter proudly approves of this message and I’m going to vote at the polls like an honest citizen, not a scheming rat with an absentee ballot that can’t bother to go to the polls and mix with the populace.

Join me at the polls on Tuesday, January 19th, to help vote Martha into the senate as the first Massachusetts female senator! WWTD?

2 responses to “BUTT OUT! Scott Brown”