Long ago, and today, in the far-off land of Cäriss A’Privet, where its people inhabited a grove of trees, lived a child named 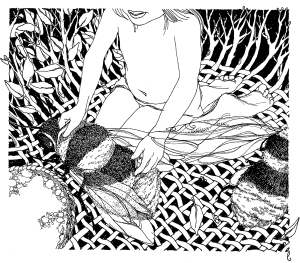 Luna.  Under the trees prowled Aleck, a sleek black panther, always watchful, always hungry (so the parents of young children said).  The panther had been prowling ever since the trees had grown and become the Privetan’s home.  He prevented them from exploring the ground and they watched him nervously.

The Privetans harvested nuts and fruits that they dried and stored in tree hollows.  They tamed wild birds and gathered their eggs.  The women collected rainwater in hand-coiled vine baskets.  The men wove the tree branches into dense mats and sturdy vines into hammocks used to rock children to sleep.

Rain had not fallen for many days and slowly the tree’s leaves began to wilt and wither.  The number of water baskets grew smaller, causing alarm.  Still below, Aleck paced, smirking maliciously.

The Council of the Wise was called; it wasted many days arguing back and forth.  Not one of the Council members had ever experienced a drought, and thirst kept them bickering.  The Privetans worried, they bit their nails, they were very irritable and their children cried.  Then the child Luna spoke up.

“Why are we so scared of Aleck?” Luna firmly questioned her elders.  “Has he ever harmed any of us?  You say that he is smiling, but a panther grin may be the same as a panther frown.  He looks lonely, not hungry.  He is so old; he must be wise.  He might know what to do about our lack of water.”  Luna finished her speech with her hands fisted on her hips, a little out of breath.

The old men wagged their fingers; the women rocked on their heels, silent.  An elder had never ever thought of this!  The leader brushed her graying hair back behind her ears and searched Luna’s eyes.

“Yes, Luna, go to the panther and tell him of our need.  Get him to speak.  Perhaps you are right and he is wise.”

Even Luna was surprised by the leader’s words.  Speak to Aleck!  Wasn’t it reckless to send a child to do such a task? 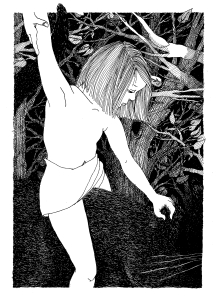 Patiently Luna watched the panther circle below, and when the time was right, she lowered herself from the branches onto the great panther’s back.  She grabbed soft folds of neck fur to steady herself.  Leaning toward his ear, Luna said in a bold voice,  “Listen here, Beast.  It is Luna of the Privetans speaking, listen well.”  The panther stopped and cocked his large head.  The child smell itched at his nostrils.

Luna leaned so far forward that she lay between the huge cat’s ears, crossing its eyes.  The trees were silent with attention.

“We are lack water and the experience to aide us in finding it.  I have been watching you pad around and around below.  You sleep in a hollow and feed in the back woods.  You must drink!  Please guide us in searching for water.”  Luna felt five inches taller after her speech, growing pains or lightheadedness, she couldn’t tell which.  It was the big cat’s turn to speak.

Speaking to the trees, he rumbled, “It is quite peculiar that you come to me now, never before have you spoken. It is an insult to send me a child. I have padded around under this Privet grove because I was sure a child or two would drop by chance and I could eat it.  Just like this jabbering jay on my back.”  His audience was stunned.  Luna didn’t know if he was joking, she was feeling too cramped to think.  She kept bumping her head on low branches that hadn’t been so low before.

“I have watched and waited while my cubs became grandparents.  I dabbled at my plan while you played.  I waited patiently for a fat two-year old to snack on, but you people are careful and your children too obedient.  I’ve had to prey on easier snacks.  Still I roam around the groves; a habit is hard to break.”  Aleck shook his head to clear his eyes and almost dislodged Luna, who was becoming a heavy burden.

“I am not very wise if I couldn’t figure a way to climb up between your branches and eat my fill, yet I may know of some water…” All the people strained to hear, and some burrowed further down into the branches to get a better look.

“He knows of water! Water!” muffled voices sounded through the grove.

“Well, Luna, it may have been easy to get down from the trees, but can you see a way back up?” the panther asked, grinning again.  “I cannot see how you will climb up with all this crowd blocking your way. I finally have my wish! ”

Many hands reached down, waving, stretching to help.  Voices buzzed caution, until a loud voice cried down, “We will have the water, Beast, and the child will be safe.  Let her be, Aleck.  Bargain with me!”

“I cannot even see who is speaking to me without introduction, but I suppose we can

bargain,” replied the big cat.  He toyed with the idea of eating the girl where she was.  One sharp bite, a deliciously slow swallow and he would have the first taste of his wish.

Luna cried out, her voice ringing with discovery, “Hi-ho, Smart Aleck!  I could gobble you up!”  The tree grove looked like hedges; she had grown that tall with all the talk!  She worked her arm around the panther, under his soft belly and around, quick as she could, until she held him fast.  Clearing the branches, she stood up.  Aleck, bold with his wishes and threats, had not noticed her growth.  Now he trembled, kicking at the air.

“Your water is easily seen, Cat.  You are no longer needed.  Scat!”  Luna tossed Aleck down where he landed and crawled, belly low to the ground, to hide under the cool porch where no one could scold.

She stretched slowly to shake off her tree grove daydream.  Luna picked up the hose and caught the flowering hedges in a drenching shower, making steamy rainbows in the hazy sunlight.

Thanks for reading my blog! Cancel reply