CREDO mobile released StoryCorps’ animated video on Facebook. I saw it on 7/11/2016. 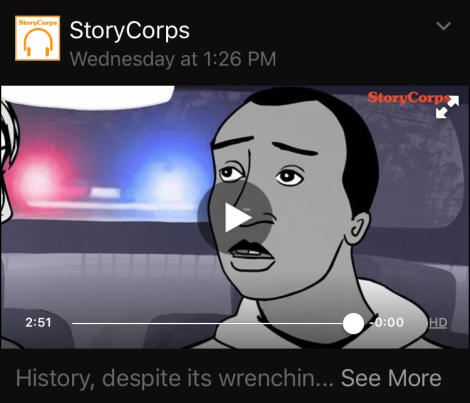 “History, despite its wrenching pain,

Cannot be unlived, but if faced

With courage, need not be lived again.”

In our #animation “Traffic Stop,” Alex Landau shared his story of a 2009 account with police in Denver that went wrong.
As we follow the events in the death of #AltonSterling, we bring you this story today and ask you pay attention to what’s happening as it has happened before.

Yvonne Ying wrote: Justice was not served. Only two were fired for lying on a police report and not in this case. One was later reinstated. The Denver police said there was no evidence that the police covered up the beating and no evidence that the beating was racially motivated even despite the testimony of both men and Landau’s injuries. The three police officers should be in jail. But they’re probably at a Trump rally where they can be free to be as racist as they want. http://www.denverpost.com/2013/04/05/review-clears-3-denver-police-officers-in-2009-beating-of-alex-landau/

Karen Vinet (Credo commenter): I am a white woman. Eight years ago, I was speaking to three black men in front of our children’s school, just after dusk. One was the head of school, one was the director of facilities, and one was his employee, waiting for the director to drive him home. I was a PTO officer.

We were discussing some upcoming event, and brainstorming, planning to go to a nearby coffee place to finish. I didn’t even notice the police car drive by. The second time the same officer drove a little more slowly, watching us.
Both of these professional, well-paid men stopped mid-thought, and said get in your car.
I was naive at the time, and when we met again later that evening, I asked them what all of that was about. I couldn’t believe that they were afraid the situation would escalate. I thought they were crazy. This wouldn’t happen in 2008, I said. They explained white privilege to me.
I started seeing it everywhere.
And I know that if we had stayed on that very busy street, and the police car came a third time, I would be the only one not in handcuffs.
Original comment by Abby Wilkerson, “White friends, please watch this, especially if you don’t know anyone who’s had to deal with the reality or the fear of police violence. As we all know, there are countless police officers who are honorable and courageous (and I am proud of someone in my family who has served in this way and helped make the world a safer place). But there is also undeniably something deeply wrong in the culture of many police departments and in our judicial system. This StoryCorps project animates life experiences told by ordinary people. Please watch this one.”

KP(me): Yeah, I get the code talk “he’s reaching for his/her/a gun (hands up, no gun)!”; “he’s asking for a warrant (elitist)!”; “he’s resisting arrest (while in handcuffs)!”; “I/we feared for my/our life/lives!”; “he’s a thug (wearing a hoodie)!”; “he’s not complying (needs to be taught a lesson)!” … for dealing with black ‘targets’. The cops all know what to say to cover up their crimes so that the DA can ‘whitewash’ video evidence.

And the deaths keep on piling up as white people deny they have privileges that black people can never acquire, even President Barrack Obama! 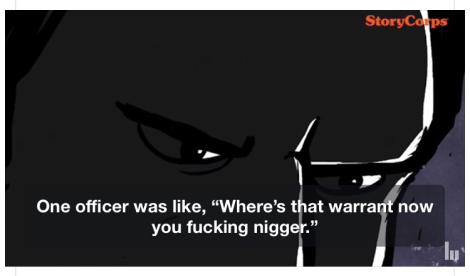