A reflection on– Why automation means we need a new economic model By Robert Reich Mar 17 2015 agenda.weforum.org 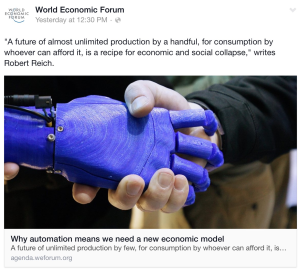 Robert Erich, I have given this subject a lot of thought, it’s been percolating behind my left ear for roughly 27 years. Oh, I have many sources to blame for diverting my attention from parenting, working, cooking, cleaning, fostering my martial and spiritual relationships, practicing religion and community service; science fiction and human nature has robbed me of my optimistic and salient peacefulness. I can’t help but see that being the greedy lazy unfeeling blind and uneducated slugs that we are, as an entity, has wiped out all our do-gooders deeds in favor of enhancing the climb to the top of the dog pile. Why so glum? Science fiction. It’s fiction, you point out. And fiction is, well, fiction. Wrong.

Science fiction is manifesting itself every day. EVERY DAY.

We are constructing this model now. The new economy doesn’t need you or me to flourish.

I have constructed a conversation of sorts and borrowed commenters and their opinions reacting to Robert Reich’s article posted on the World Economic Forum site.

D L S: So why won’t Robert Reich just come out and say: we have to institute a guaranteed income for all citizens? Let’s talk about a minimum of $2000/month for all? It could replace all the welfare programs, reduce all that unnecessary “proving” that you deserve help. It would end a lot of crime. It will end much of our poverty, homelessness.  It would open all sorts of possible activities for people — in the arts, in education, in so-called “low-wage” or “no-wage” work. Imagine how many ways all lives would improve. Imagine how immediately that money would find its way back into the economy. It is an all-win option.

I C: i wonder why anyone thin[k]s its a great thing to have everything automated. why have children??? robots are our self-destruction … robots don’t spend money.

R B: This is a serious issue.  If you think income inequality and poverty are bad now just wait until the rich don’t have to pay anyone to work.  It’s time we all start talking about a basic income for all and a single payer healthcare system.  The extreme cost of housing due to the greed of the rich has to be addressed as well.

C H: Automation was supposed to benefit the middle class as well by creating more production meaning more leisure time and more services and more wealth for all…remember the 50s and their ideas of the future..the Jetsons et al….well the corporate 1%ers stole that future from us by taking all the advantages for themselves, and a complacent middle class enabled the destruction of the union movement, the offshoring of jobs, the buying of politicians and the dumbing down of society through believing the rhetoric of anti socialist propaganda. The corporatists hoodwinked society and we’re only starting to wake up while being inundated with new security to hold us back as long as they can. The battle for our lives is looming on the precipice of climate collapse and revolution.

D A F: … The first revolution replaced a lot of physical labor.  This one’s getting the physical, and more and more of the mental.  The automation is far more generic. You are going to see massive and unprecedented levels of job destruction, with insufficient replacement.

P C: Voice mail, self-service gas stations, self-service check out stands, atm’s, automated toll booths, automated factory assembly jobs, …have all replaced lower skilled jobs.  Robots certainly won’t need collective bargaining unions….. This new generation of robots is being touted as helping to create Utopia where we all have free time.  We will all have free time allright, grubbing for food and shelter……Do we really think the Uber wealthy are going to share their begotten gains with the masses so we can all live in leisure?  what are the chances?

K A: what will happen is power will be free in countries where there is green, and people will upskill themselves to provide themselves and their neighbours with food, education, shelter, clean water etc, all of which technologies are available as green technologies. In countries where there are oligarchies and elites, like the US and Europe, people will be disenfranchised and enslaved by their elitist economies, and the new model in the rest of the world will mean wall street etc becomes obsolete. wherever people can feed and power and shelter themselves without having to pay a percentage of their wages to a greedy elite, there will be more money for the community, for roads, schools, etc etc etc. Because what we all want isn’t actually lots of cash in the bank-its the freedom that that cash gets us. if that freedom can be provided through green energy and building, then all of a sudden, oil and coal and pipelines and blah mean nothing. if people can start feeding themselves with suburban farms etc, huge food producers become obsolete. centralised power becomes obsolete. trying to corner the market becomes impossible.

This is one area where I am a fatalist. The citizens of America do not need to fear outside terrorists, we will undo ourselves. This is my Boolean thought and it takes me back to the top of my scribble. I can’t get pass The Terminator. Or The Matrix.